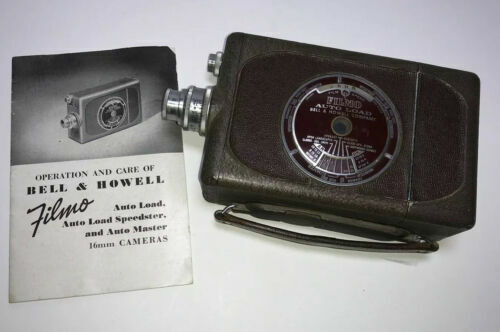 Everything to Know About Bell and Howell 16mm Vintage Cameras

Bell and Howell is an American photography company that was founded in 1907. This company has produced a variety of different motion picture cameras, and these cameras have been used across the world. You can find vintage cameras made by this company by searching through this collection.

What is a vintage 16mm movie camera?

This type of camera shoots motion pictures on 16-millimeter film. This type of film was standard to movie cameras during the first half of the 20th century. These cameras shoot movies on a reel of film, and this reel can then be removed and reproduced or played on a projector. These cameras are similar to other types of motion picture cameras in that they have lenses, viewfinders, and metal bodies. They can usually be mounted on a tripod, and they generally come with a protective case.

Follow these steps to use a vintage movie camera manufactured by this company:

Content provided for informational purposes only. eBay is not affiliated with or endorsed by Bell and Howell.