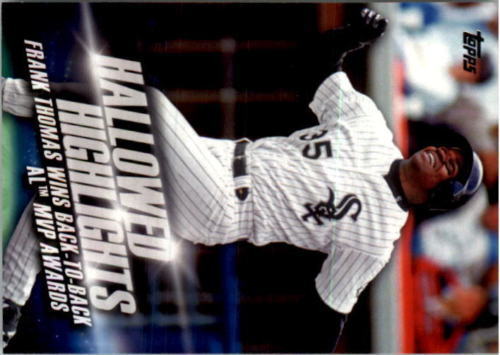 Baseball cards have been around since the late 19th century, with America being the most popular country to produce them, due to the national love of the sport and sporting memorabilia. They feature a picture of the player on one side, and information about him, his team, and his career on the other. Production and trading of the sports cards stepped up significantly in the 1930s and gained momentum into the 1990s. Frank Thomas was a first baseman and a player for American League teams in the 1990s and 2000s, with a stellar and unblemished career record behind him. Largely known for his tenure in the Chicago White Sox, he was renowned for his home runs. Frank Thomass career happened to hit its peak at the same time that baseball cards were wildly popular collectors items, meaning there are hundreds, if not thousands, of types of cards from which to choose. Topps baseball and Leaf baseball cards were two of the main producers and huge players in the baseball card market.

Which Frank Thomas Cards Are the Most Valuable?

As with many collectibles, the most valuable baseball trading cards tend to be those produced the earliest and those that are rarest. Gem Mint cards, or those which are in perfect condition, are always likely to fetch a valuable price.

Which Other Frank Thomas Cards Are Popular?

Not confined to simply producing pictures of the baseball player, the year, and some information on the back and box, card companies got more inventive by the day, adding all kinds of features to otherwise simple designs on their packs.

Content provided for informational purposes only. eBay is not affiliated with or endorsed by Frank Thomas.